After work today we went to Liverpool Street station to buy train tickets for tomorrow (more about that anon) and while we were there, Tigger invited me out to dinner. An offer not to be refused!

We thought we would go to the Spitalfields branch of S&M, the famous “Sausage & Mash” cafe, but it turns out that they have closed down. They will be missed. 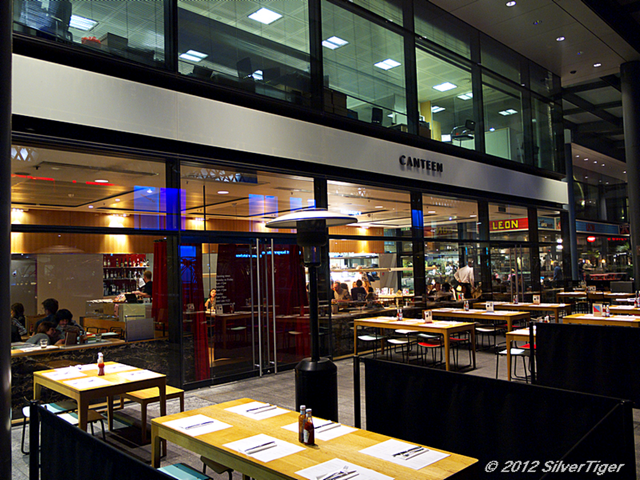 Instead, we turned into Spitalfields Market and dined at Canteen. I won’t bore you with the details except to say that they do a very tasty macaroni cheese, baked to golden crispy perfection!

At night, the Spitalfields Market is a slightly strange place. The stalls are empty, leaving a cluttered feeling to the place. The huge hall becomes a night-time venue with restaurants and bars. Despite the lamps it is dark, with pools of coloured light here and there.

Gateway
One of the market gates

It seemed very quiet with few diners besides us in the restaurant. Perhaps it becomes more lively later on.

We left via Brushfield Street, where I took the above photo, looking towards Christ Church. Darkness had fallen by now of course, and the scene was one of contrasts between areas of light and deep shadows.

The City is a place where you find old buildings, some dating back to Georgian times, mixed with modern office towers. In the above photo, note the “ghost sign” above the English Restaurant. It advertises Percy Dalton LTD., “Nut Importers and Roasters”. Percy Dalton still exists, though in another part of Spitalfields. 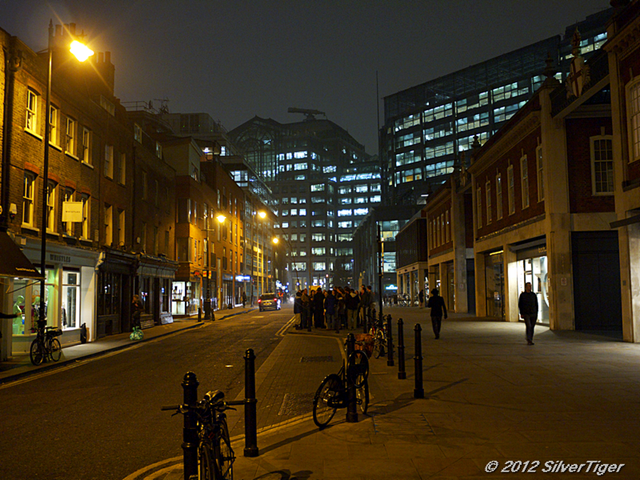 In the above photo, we are looking along Brushfield Street again but this time towards Bishopsgate. The gaggle of people in the middle of the frame is a tour party being entertained by a guide. Night-time tours are quite popular though they tend to be on the more lugubrious themes such as hauntings and murders.

“I Goat”
by Kenny Hunter

In the open space, we came across this sculpture, representing a goat on a pedestal. I must say it makes a refreshing change from the usual modern art rubbish that is being inflicted on us at every turn, and I am always pleased to see something that shows animals in a sympathetic light. This piece, entitled “I Goat” (shouldn’t there be a comma in there?), is by Kenny Hunter. His Web site is given but it won’t tell you much as it seems to be one of those that are eternally under construction. Strangely, the ascription plate gives us the sculptor’s date of birth (1962). Perhaps he’s an Adrian Mole fan.

Night-time photography offers challenges, of course, because of the low light levels. On the other hand, it provides the opportunity for a different view of the city which can often be startlingly beautiful because of the lights. I don’t use flash if I can possibly avoid it because I don’t like the effects it has on the scene. I rarely use a tripod, not because I have anything against them (though they can be a liability on crowded streets), but because I almost never remember to take one with me. I do the best I can without these aids, sometimes steadying my arms on some solid object if there happens to be one, otherwise taking several pictures and hoping that at least one will turn out half-decent!

This is not a scene from Dante’s vision of Hell but a group of drinkers outside a bar lit by the red light from the heating lamps. Since smoking in pubs and other public places in the UK has been banned, smokers and those accompanying them have to smoke outside. Many pubs and bars provide facilities such as tables and chairs and, in winter, heaters, in order not to lose the trade from smokers. 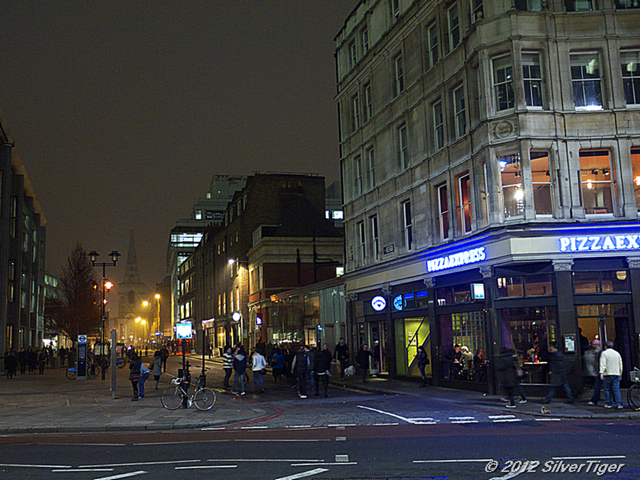 Brushfield Street
A last glimpse with Christ Church in the background

We emerged into Bishopsgate, one of the main arteries running through the City, and made our way to a bus stop. As you can perhaps see in the above picture, the lights are nuanced by what is a haze at ground level but more like a fog above the roof tops. Only the tallest buildings reach it, however. 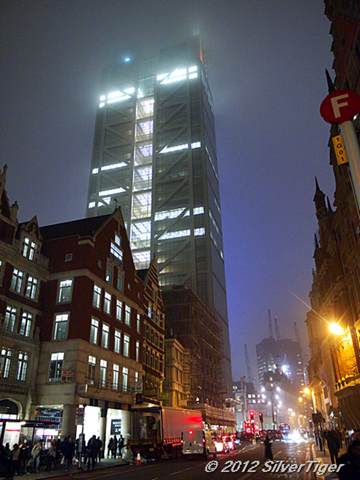 At 202 m tall (230 m if we include the radio mast), the Heron Tower is high enough for its head to be swathed in mist, though the haze is also causing haloes around the street lights.

I live in Islington with my partner, "Tigger". I blog about our life and our travels, using my own photos for illustration.
View all posts by SilverTiger →
This entry was posted in Out and About and tagged City, Spitalfields. Bookmark the permalink.