Tigger returned to work today, leaving me to occupy myself as best I could. As it happens, there were two items requiring attention.

The first brought me here, to the Pickering Dental Surgery in Upper Street. One of my teeth had been troubling me from time to time and it transpired that root canal work was required. Today was the day appointed for this to be done.

Out into Upper Street

The session lasted perhaps an hour or so. While I cannot say the experience was pleasant, it was not painful as the area of my mouth surrounding the target tooth was number by injection. I was glad when it was finished, though, and I could escape out into Upper Street.

Fox on the Green

As I reached Islington Green, I paused to take a photo of the pub whose address is 1, Islington Green. It is a rather splendid building with a history going back at least to the beginning of the 19th century, though it has possibly been rebuilt or remodelled at some point. The fact that it possesses a clock (sadly, not working) shows that it has enjoyed affluent times. An outline of its history and some photos of its appearance in past times will be found on this Pubwiki page.

Further along, my attention was caught by these chairs outside a restaurant called Desperados because they were so colourful. On a dull day like today, we can do with some colour!

I don’t know how long this shop has been open but we first noticed it a few weeks back. Rather unimaginatively named Upper Street Bookshop, it doesn’t seem to have a website. There is a long-established branch of Waterstones at Islington Green but, in an age when bookshops are becoming an endangered species, the arrival of a new one starting up is worthy of note. I wasn’t in a mood to go into the shop today but we’ll definitely take a look at some point.

On reaching home, I rested for a while. It may seem odd to say that reclining in a dentist’s chair is tiring but it felt so to me. Perhaps it’s the nervous tension that saps your energy. Having rested, I turned to the second of today’s items requiring attention.

That item was the laundry, skilfully packed into the shopping trolley by Tigger and now needing to be trundled round to the cleaners.

A victim of Christmas

In Myddelton Square, I passed this Christmas tree. It was bought, decorated and made much of but then tossed out as garbage. It is so wasteful every year to kill so many young trees. It’s time we thought of better ways to celebrate Christmas that don’t involve such waste.

This is where we take our laundry at present. They wash, dry and fold it and so far have not lost any items, unlike one of the shops we tried previously. 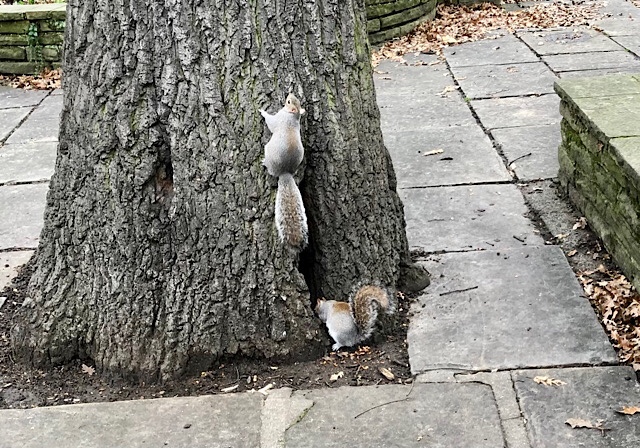 In the way home, I walked through Myddelton Square Gardens and stopped watch a couple of squirrels. The tree has a hole in it and someone places nuts in it for the squirrels. The squirrel hanging further up the tree had come down to visit the larder but the second squirrel chased him away.

To the victor, the spoils

The second squirrel, having chased away the competition, settled down to enjoy the spoils. I just hope that when he’s had enough and departed, there will be some left for the other squirrel.