Posted on December 2, 2021 by SilverTiger

London has so far been spared the disruptions caused by bad weather that have afflicted some other regions but it has been cold enough to persuade me to remain indoors most of the time. Today provided a welcome break from my self-imposed hibernation.

It came in the form of a text from Tigger, saying that as she had some shopping to do in Moorgate on the way home, would I like to meet her for coffee st Costa in Eldon Street? Indeed I would! 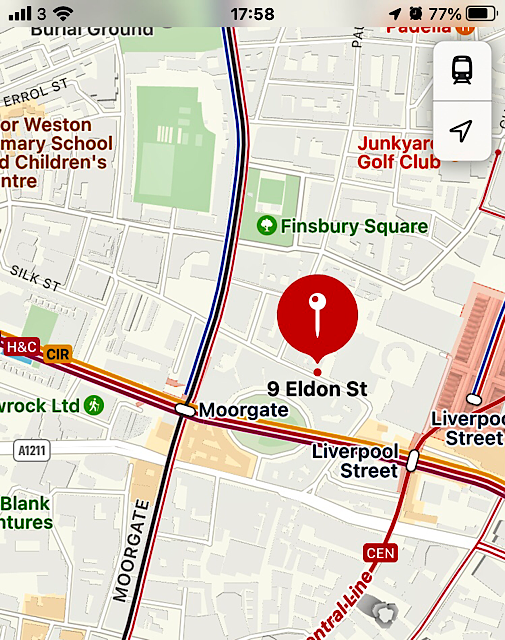 The above Apple Maps snippet might give you an idea where Eldon Street is. It leads from Moorgate to Liverpool Street Station. The easiest way to go there from the Angel is to catch a 153 in St John Street.

I chose my bus carefully, hoping it would deliver me to Eldon Street at the same time as Tigger, not easy to calculate as traffic density is beginning to increase at this time of day, causing delays. 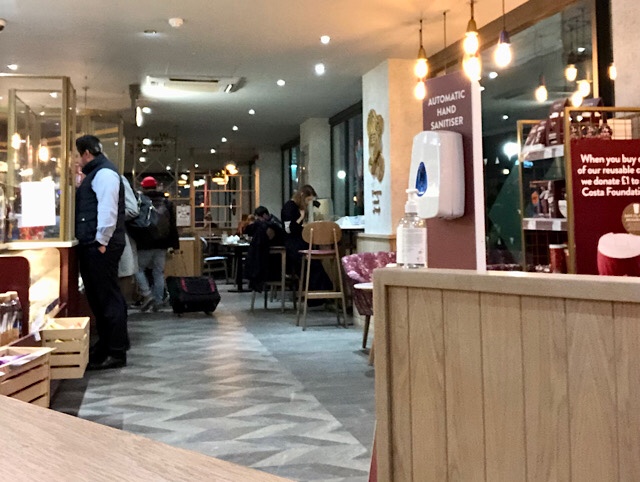 As it happens, coming from our different directions, we met outside Costa: good timing for once!

Coffee and shortcake
Photo by Tigger

Though Costa was rather busy, we managed to find a table and settled down with coffee and shortcake biscuits.

Tigger showed me some photos of illuminations that she took at Tower Hill, including this fine white tiger on a reflective base.

Afterwards, we walked back along Eldon Street to Moorgate. Darkness had fallen and everything was lit up including the office blocks on Moorgate.

For Tigger’s shopping, we went to the Moorgate branch of Marks & Spencer and took the escalator down to the basement where the food department is located. There were already lots of Christmas goodies on the shelves, making the place look especially colourful.

At the bus stop

Then we returned to the cold outside and crossed the busy street to the bus stop. Fortunately, we had a bus within one minute.

When the 153 arrived, there was already another bus standing at the stop and the 153 nearly sneaked past without stopping. Tigger flagged him down, though, we boarded, and off we went!