Today we went out at 1 pm to avoid what was promising to be a very warm afternoon. As it was, the thermometer was already tipping the scale at 23° C (73° F). 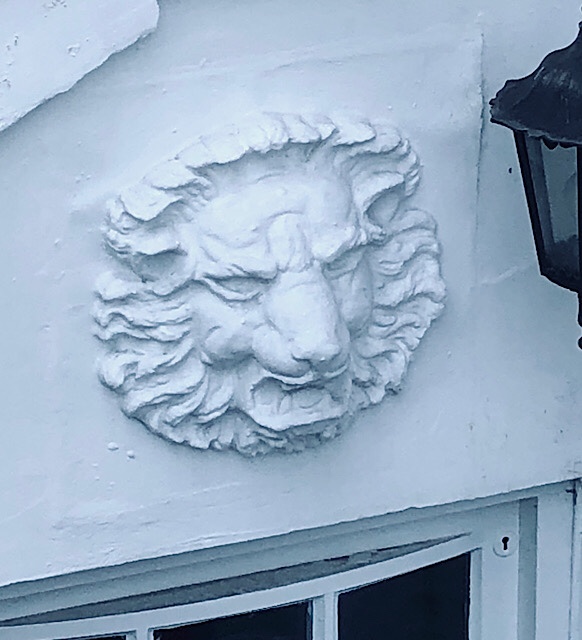 Passing through Claremont Square, I photographed this member of Islington’s collection of lions. He resides above the basement door of one of the houses.

Claremont Square is named after Claremont House, an 18th-century Palladian mansion in Esher, Surrey. Perhaps the developers hoped to enhance the reputation of their houses by giving them a noble connection. 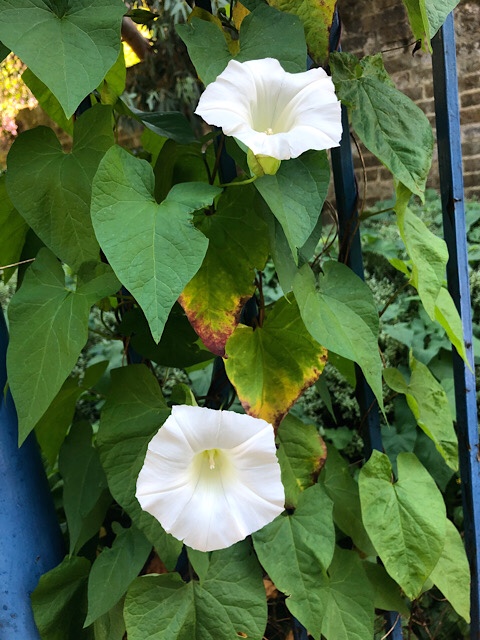 These pure white and perfect convulvulus flowers were dancing in the breeze on a branch poking through the railings of a garden. 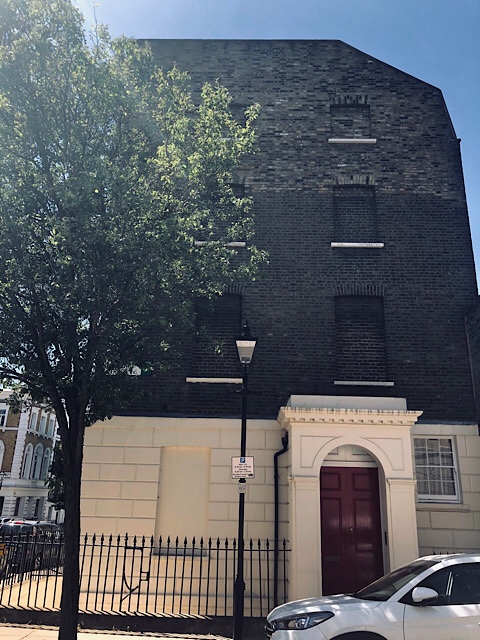 I happened to notice this end-of-terrace façade and the fact that all six windows were bricked up. Or were they? Might they not have been deliberately built this way, using false windows to relieve the plainness of the blank wall? 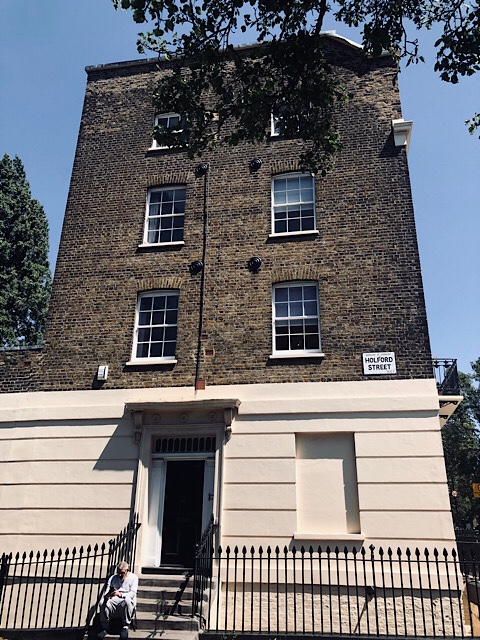 This façade, immediately opposite, has all of its windows glazed, suggesting that the first would have also had clear windows and that these have later been blocked deliberately.

Why might the occupants block the windows? There could be many reasons but one might be the window tax. This tax was levied during the 18th and 19th centuries, requiring householders to pay according to the number of windows in their property. Many chose to block up some of their windows to reduce the tax burden. Might this be the case here? There is no way of knowing, unless there are records somewhere that mention the fact.

Once you notice a thing like this, you start to notice examples everywhere. 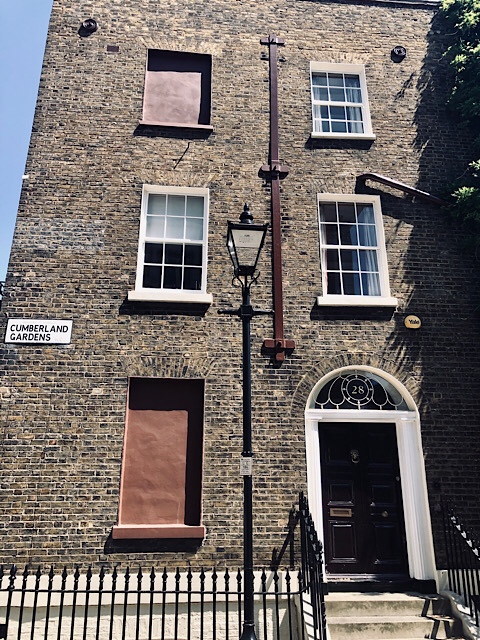 This house had just two windows blanked off but I notice that they have been closed with partions (which could presumably be easily removed), not with bricks, and so I am guessing that this is a modern alteration for reasons best known to the occupants. 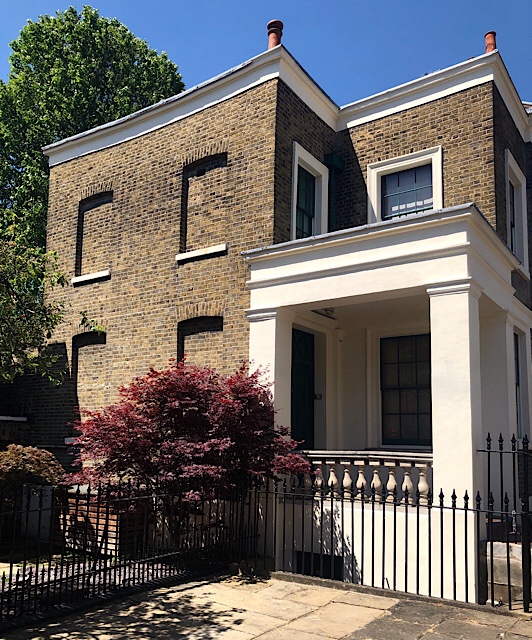 Another bricked set of windows

Here is a third and last example. As with the first, the whole façade has been blanked out and with bricks closely similar to those of the surrounding brickwork, suggesting that here too we see tax avoidance.

Could these windows be restored if the present owners wished to do so? In theory, yes, but there might be legal difficulties. Much of the Georgian style buildings in this area are listed by Historic England, meaning that they cannot be altered. It’s possible that altering the building by restoring the windows is disallowed or, if it is allowed, that the new windows, their frames and surrounds would have to be an exact replica of the originals – which might be a very expensive undertaking. The house owners might prefer to leave things as they are. 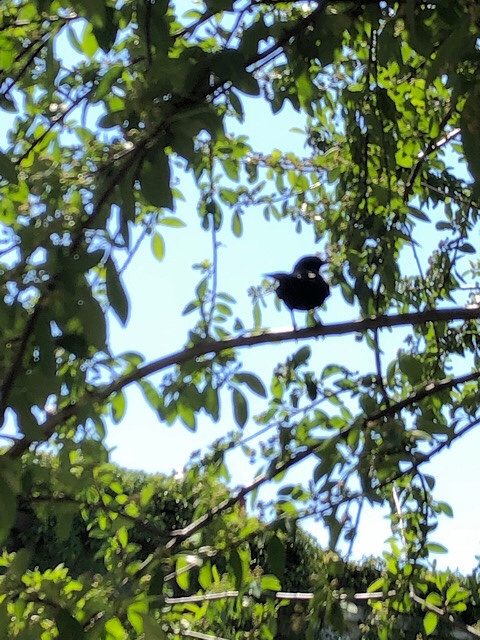 Tigger snapped this blackbird singing a merry song before flying off about more pressing business. 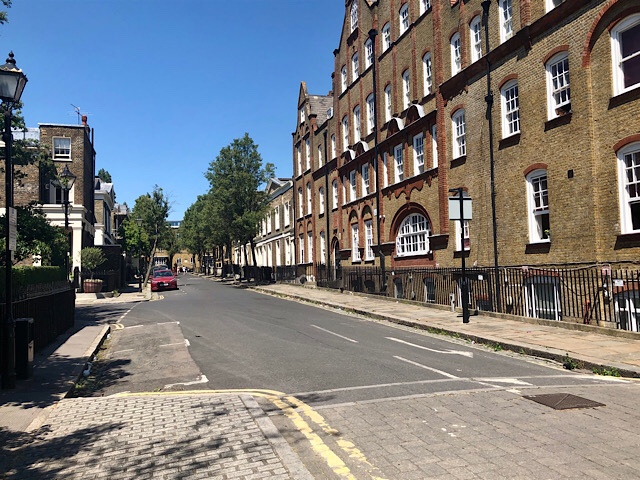 This view along Lloyd Square into Lloyd Street was taken from the last corner before Myddelton’s. Today, perhaps because we were early, there was a queue and we had to wait patiently outside until it was our turn.

There are each day more people in the streets, some wearing masks, some not. Some seem quite oblivious to the distancing rules while others follow them punctiliously. Mask wearers are often the least cautious as though they think the mask confers immunity, which, of course, it does not. Let’s hope they are not caught out by the virus because if they are, then they become a risk to all of us.