Posted on January 2, 2013 by SilverTiger

In Lions and philanthropists I presented a photo of the handsome, late Victorian building with terra cotta embellishments that stands on the corner of Almeida Street and Upper Street, Islington. Here it is again:

Victorian terra cotta
Was this ever part of Myddelton Hall?

Having looked up Myddelton Hall in An Illustrated History of Upper Street Islington (Part Two) by Jim Connell, I assumed that the above building was part of Myddelton Hall as rebuilt in 1891. Recently, someone has asked permission to use this picture in a forthcoming book and this caused me to look at the assignation again, more carefully. It turns out that information on Myddelton Hall is somewhat sparse and leaves many gaps in its history that are now difficult or impossible to bridge.

Almeida Street (near the centre of the above map) leads off Upper Street. Until 1890, it was called Wellington Street but was then renamed in honour of the Duke’s part in causing the French withdrawal from Almeida in 1811. Note also the nearby Waterloo Terrace. Today, Myddelton Hall is at 32 Almeida Street, close to where that street meets Upper Street. However, in 1856, the newly built Myddelton Hall acquired an entrance at 142 Upper Street, on a property previously occupied by a milliner’s shop. This seems to have led to some confusion about where, exactly, Myddelton Hall stood, some citing is as being in Upper Street, others as being in first Wellington Street, then Almeida Street. (For a Google map of the area see here.) 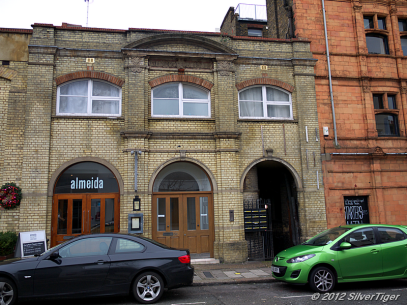 Myddelton Hall 1891
The entrance is now in Almeida Street

There seems to have been a demand in the area for general purpose public venues because next door to Myddelton Hall, further down Almeida Street, stood Wellington Hall. What the relationship was, if any, between the two halls is not known, and Wellington Hall has now disappeared. Myddelton Hall was used for performances, lectures, meetings and fund-raising events. The Barnsbury Literary Institute, the Barnsbury Dramatic Club and the Barnsbury Debating Society all used it as their regular meeting place. Performances were given here by the North Islington Academy of Music and the Islington Vocal Union. The North London Photographic Society, the South Islington Liberal Association, the Myddelton Building Society and the London City Mission all gave it as their business address. 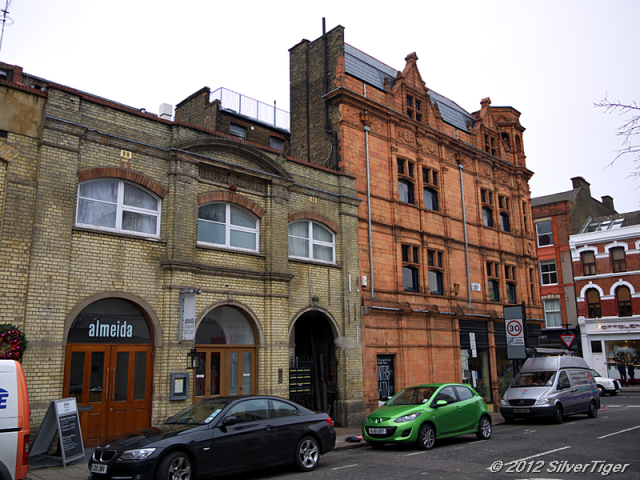 The Hall was considerably rebuilt in 1891 and its main entrance was then repositioned in Almeida Street, where we can still find it. Above the first-floor window, lettering in relief reads “18 Myddelton Hall 91”, a mixing of date numerals and name letters found frequently in buildings of this period.

So much for what we know. The rest, alas, is speculation unless someone can discover some more information. I assume that the terra cotta building was part of the 1891 rebuilding programme, though I am doubtful that it was ever part of Myddelton Hall as such. At a later date it was altered inside to provide accommodation for offices and commercial premises. Perhaps it was specifically built as an income generator, an early example of the greedy “redevelopment” that is still being allowed to ruin our city today.

The present corner building, erected in 1891, never contained an entrance to Myddelton Hall but, if we assume that it has roughly the same dimensions as its predecessor, it’s easy to imagine that that entrance would have been where the restaurant called La Porchetta stands today. The unit on the corner, currently occupied by Le Mercury, is numbered 140a, while the building numbered 140 is on the other corner of Almeida Street. I speculate, then, that the corner unit (now Le Mercury) was once 141, the property occupied by the Thai restaurant was 143, as now, and that the double frontage numbered 142 (today 141 and 142) would have been the old entrance to Myddelton Hall. That’s mere guesswork, of course and could be entirely wrong.

A little further along Upper Street, we come to Terrett’s Place. This is not shown on Google Maps but does appear on Bing Maps (see here). It is an L-shaped lane or alley that leads behind the buildings on Upper Street. Possibly, this once provided a back entrance, a sort of “stage door”, to Myddelton Hall, though today it is closed off.

So, you see, my investigations have led to more questions than answers and I am not sure whether information that answers those questions still exists. On Saturday, as I recounted, we went to the Local History department of Finsbury Public Library and were shown books and maps that referred to Myddelton Hall and the area. It was as frustrating as it was intriguing because, despite the many hints, there was no firm information to grasp. It was like doing a join-the-dots puzzle with the most important dots missing.

If anyone does have any information that would fill in the gaps or knows of a source that may help, I would be glad to hear from you.

I live in Islington with my partner, "Tigger". I blog about our life and our travels, using my own photos for illustration.
View all posts by SilverTiger →
This entry was posted in Islington and tagged Myddelton Hall. Bookmark the permalink.