I went down to the historic Borough this evening to meet Tigger from work. As we walked along Borough Road, we encountered a couple of the crows who live in the area.

The first crow had found a piece of French bread with a nice layer of butter on it and was tucking in with gusto. Although we were quite close, this didn’t seem to worry him. Even so I avoided looking at him directly because I know this tends to make birds nervous. (I put this down to the theory that birds living in towns and co-existing with humans have learnt to interpret our gestures and body language and regard an insistent stare as a possible sign of aggression.)

Faced with a piece of food too big to swallow, pigeons throw it up in the air hoping that it will fall and break. Crows are more practical and have learned to hold the object steady by putting a foot on it, allowing them to pull off bite-size pieces.

When a second crow arrived on the scene, I thought there might be a confrontation or squabble as there would be between pigeons where the interloper tries to grab part of the spoils. This did not happen, however. The new arrival made no move towards the other and the latter did not seem in the least perturbed by his presence. He took a brief look and then went on calmly eating. 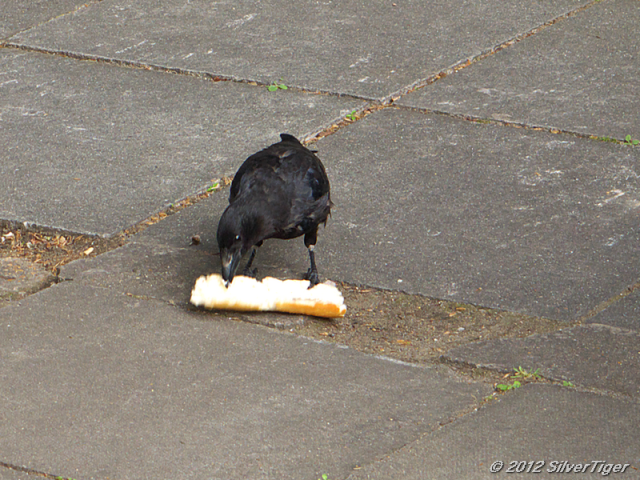 He went on calmly eating

He didn’t seem to mind me clicking away with my camera or the movements of passers-by. Either he was a street-wise crow used to people or the bread and butter was too good a treat to miss.

He glanced at me occasionally

He did glance at me occasionally but it was without any anxiety, just keeping an eye on the situation, as birds always do. Suddenly, he decided he had eaten enough and without more ado flew away.

The other crow returns

Once the first crow had left, the second, who must have been watching from nearby, flew down and started eating the bread in his turn. He had not confronted the first crow and was now receiving the reward for his patience.

You may notice that whereas the first crow used his left foot to hold the bread, the second crow uses his right. Does this mean the first is left-handed and the second right-handed? It’s tempting to draw that conclusion as I have heard of other animals being right- or left-handed.

Leaving the crows to their street-food feast, we set off to find our own street food. 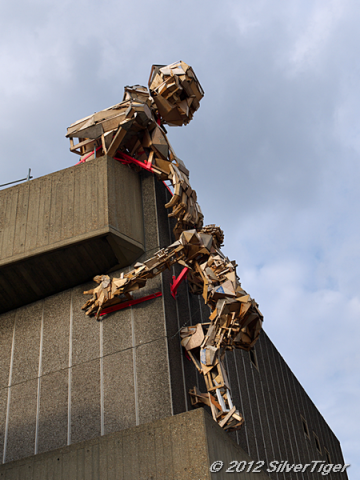 We returned to the Southbank Centre which we had visited on Sunday (see An anniversary outing). I photographed this pair of climbers again because the light was a little better today.

We revisited these strange, almost organic, structures which an information board describes as a “play landscape”, developed by Small Earth in collaboration with Hounslow Heath Infant and Nursery School.

It is interesting to see how people react to these structures, children playing in them and adults using them as places to rest or relax. It seems that Small Earth has succeeded in its aim to make an environment with which people feel comfortable enough to play.

We found our own street food here, at the Yalla Yalla stall, which sells “Beirut Street Food”. We had two wraps each, one containing falafel and salad and the other containing Haloumi cheese and salad. Whether this is genuine street food of a kind you would find on the streets of Beirut, I have no idea, but it was tasty enough.

You can see a pigeon in front of the stall in the above photo and there were of course pigeons all around, continually prospecting for food, just like the crows of the Borough. I am content to think that they picked up a few crumbs from my own supper even if they had no idea that the recipe they were eating was inspired in a faraway country of which they could have no knowledge.

I live in Islington with my partner, "Tigger". I blog about our life and our travels, using my own photos for illustration.
View all posts by SilverTiger →
This entry was posted in Out and About and tagged crows, Pigeons, Southbank Centre, street food, The Borough. Bookmark the permalink.