Looking down the line
We changed trains at Wickford

We had tried to go to Burnham-on-Crouch for our anniversary but had failed on that occasion owing to rail works – see Thanet loop. I said there that we had not been to Burnham before but I was wrong (I ought to read my own blog!) – see A day in Dengie. Anyway, we took another shot at it today. We took a train from Liverpool Street and had to change at Wickford. 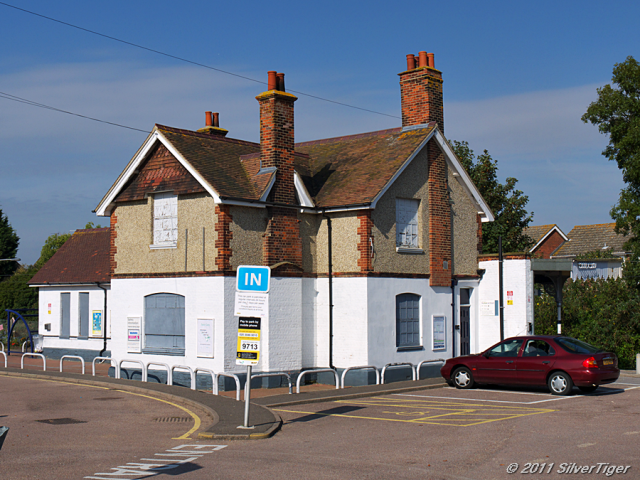 This old house…
Boarded up and awaiting its destiny

The station at Burnham-on-Crouch is small and very quiet. The station building is boarded up. I believe it has been offered for sale. Signs indicated a cafe but it was closed, perhaps permanently.

Old friends…
…out for a walk

From the station, we walked into town and noticed that Burnham was celebrating Carnival. First, though, we went down to the riverside, a very attractive place to sit or to go for a walk.

As the name suggests, Essex town Burnham sits beside the River Crouch (see maps here or here). This is a broad waterway very suitable for boats, yachts and small ships.

Boats and yachts…
…everywhere you look. And seabirds too.

Everywhere you look, upriver and down, there are yachts and boats of various kinds. Seabirds find the place to their liking too, especially black-headed gulls who were out in force today. 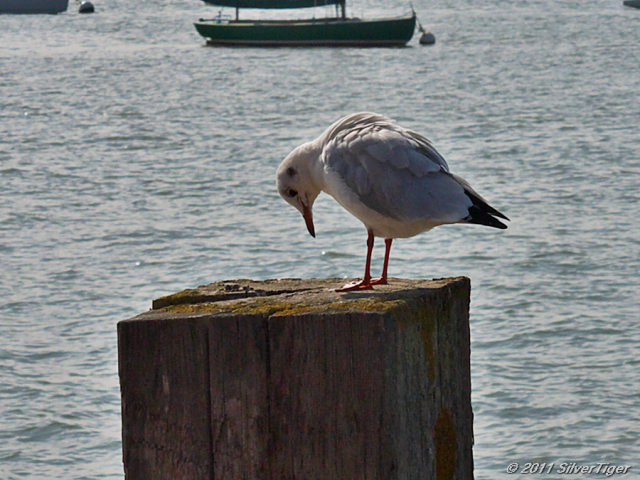 A lone cormorant
Waving, not drowning

I spotted a lone cormorant swimming determinedly towards the centre of the stream. They swim so low in the water that they look as if they are sinking. This one seemed to push along quite happily. 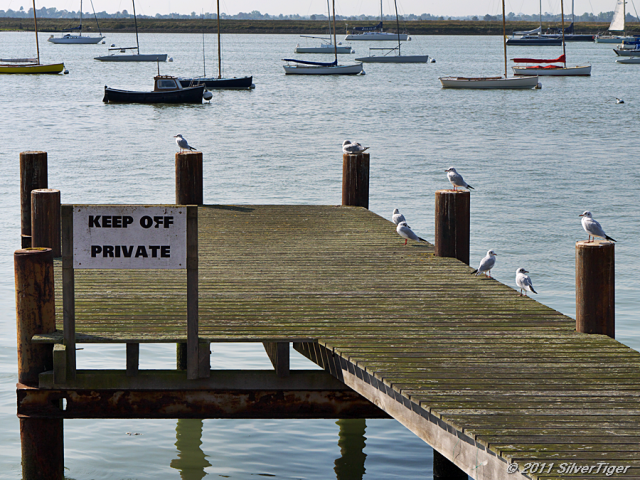 We walked back into town where the main landmark is Burnham’s octagonal clock tower. 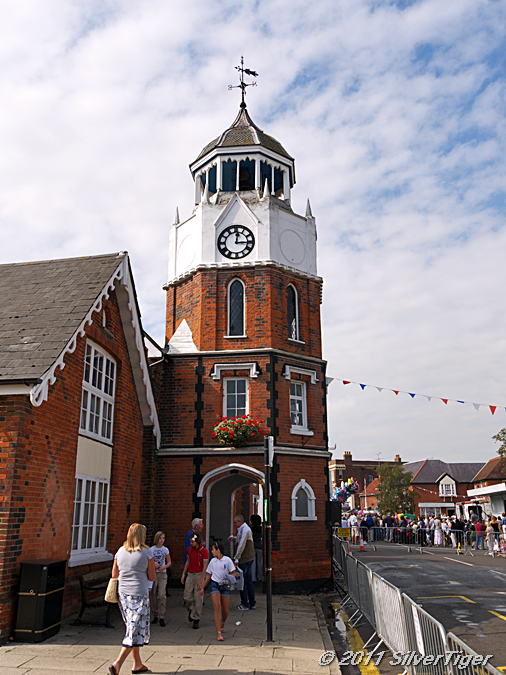 The Clock Tower
Added to St Mary’s House in 1877

St Mary’s House, to which the Clock Tower is attached, is today a block of flats but was once an Endowed School. Founded in 1785, the school was refurbished in 1815 and 1863 and the Clock Tower was added in 1877. Paid for by public subscription, it was erected in honour of Laban Sweeting, a local oyster merchant and philanthropist. 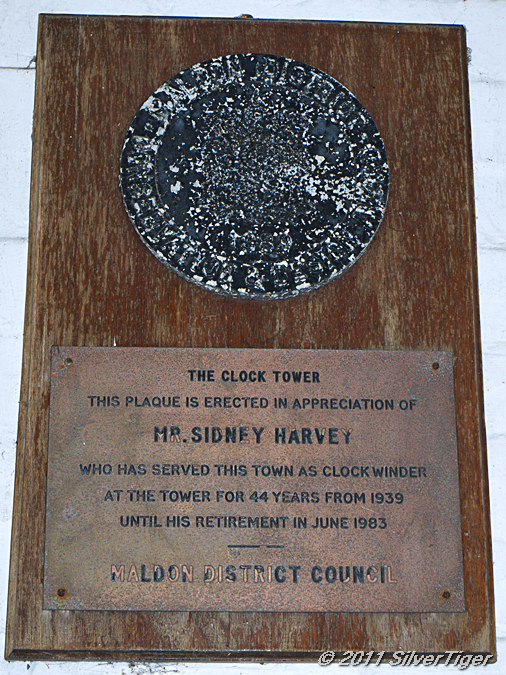 To the clock winder
On his retirement in 1983

A more recent memorial is this plaque in honour of Sidney Harvey who, by the date of his retirement in 1983, had fulfilled the post of clock winder for no less a period than 44 years. It’s rather a pity that the plaque has been allowed to suffer from time and weather.

Carnival in Burnham
Carnival with stalls and flags – bubbles too!

Burnham was staging its Carnival. The main street had been closed to traffic and was lined with stalls. The mood was happy and everyone seemed to be enjoying the occasion. 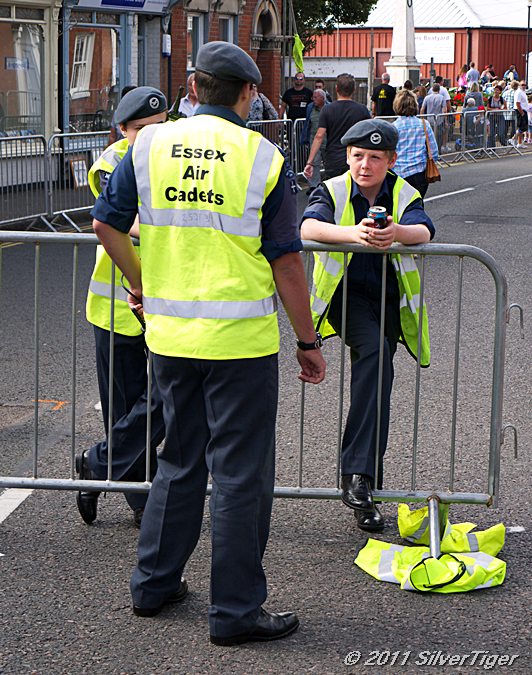 A contingent of the Essex Air Cadets was manning the road barriers at either end. They did so in a friendly but firm manner. While most motorists accepted to take a diversion there were inevitably those who tried to weasel their way through and I was glad to see that they did not succeed. 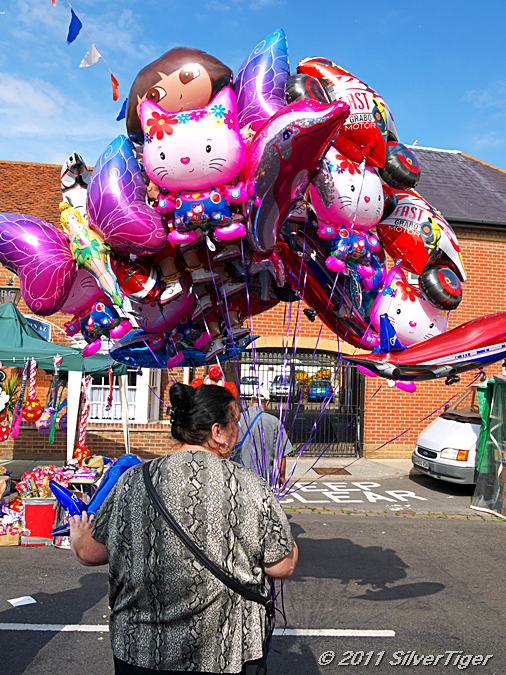 The Balloon Seller
A perennial favourite

There was to be a procession but it was scheduled too late for us and we didn’t stay for it. In the meantime, the High Street and some  of the side streets were lined with stalls.

Most of the restaurants had stalls outside where they were preparing food fresh for the passing trade. We had lunch at the Curry House where we ordered a vegetable thali and had the fun of watching our nan bread being baked in a tandoor in the street. 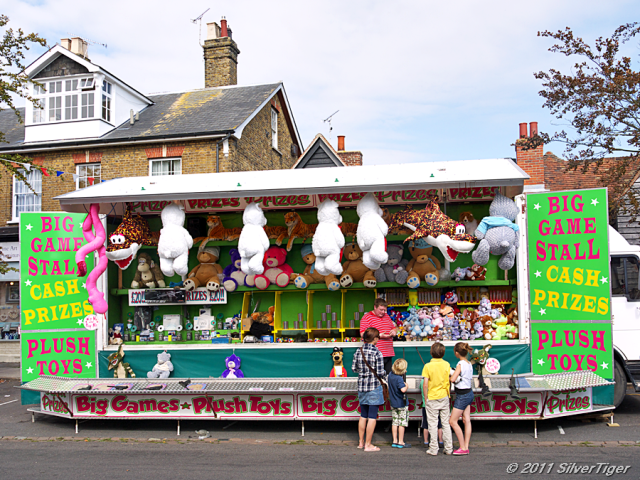 A keen eye and a steady hand…
…wins a plush toy!

There were also game stalls for both children and adults where you could shoot at a target or hook a frog to win a prize.

At the Baptist Church, a youthful group was spreading the word in music and song; rather loudly and sometimes in tune. Passers-by didn’t seem unduly impressed and the lady in the shop said “It’s a relief when it stops.”

The Rio
Burnham’s current cinema (since 1930)

We walked on up the road and found the cinema. Today called the Rio, it was built in 1930 and opened in 1931 as the Prince’s Cinema, acquiring its present name in the 1960s. Burnham’s first cinema, and one of the first in the country, was the Electric Kinema opened in 1910. It found itself unable to compete with the Prince’s and had to close.

If you don’t like spiders and other small creatures, skip the next pair of pictures and paragraph of text.

Two spiders
Spiders seem to do quite well in Burnham, judging by these two

I think this year has been a good one for spiders as I have seen quite a few and some very large ones. So they must be getting plenty to eat. In a garden we saw some shrubs that were alive with spiders with large webs and we tried to photograph them. Fortunately, there was very little wind as this can cause the plants to move and the spiders to bounce around, making it impossible to focus on them. I have selected the pair above for your delectation. 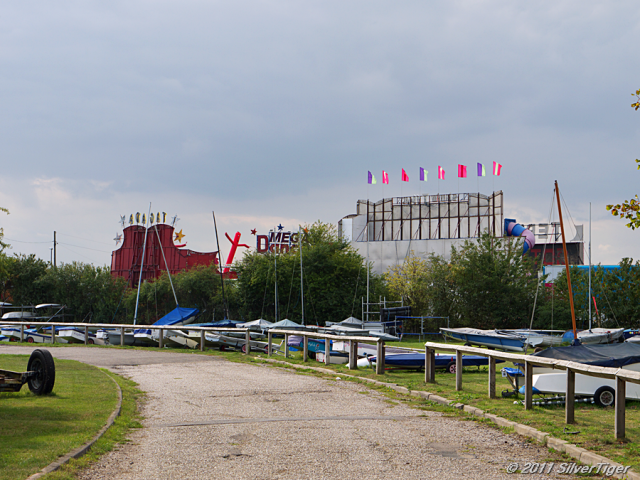 We turned again towards the river but this time on the western side of Burnham and saw that Stevens Family Funfair had come to town. In the picture you will also see some boats and their trailers belonging to one of the yacht clubs. I don’t know which one but there are no fewer than five yacht clubs, rather a lot for a small town.

Every one a winner!
Win a prize to take home

There were game stalls where you win a prize,

Fun House
Explore this if you dare!

strange environments to explore, such as the Fun House, 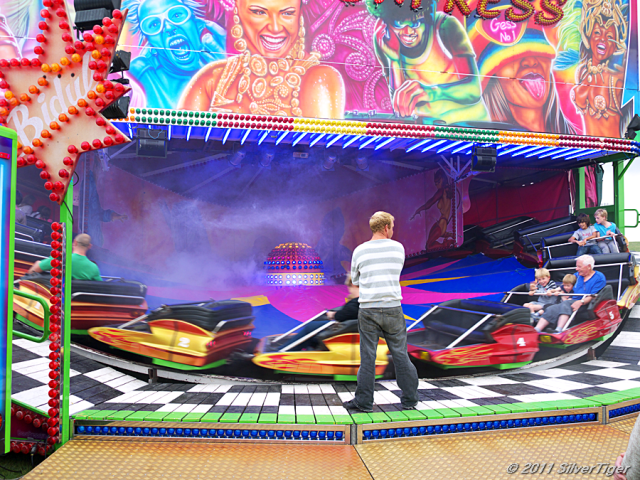 The Musical Express
Are they playing “Smoke gets in your eyes”?

more modern thrills like the smoky Musical Express, and

Home is…
…where you can fit it in

We had a good look at all the stalls, rides and booths but nothing tempted us. We left the raucous entertainment area behind us and proceeded down to the river bank.

Mud flats
The river at the western end of town

The river and the bank are more open here and the colours are more subtle. The weather was closing in too, which emphasised the effect.

House boats
By the look of them, they are permanently moored here

There are houseboats here which, like houseboats in most moorings, are of capricious design but look permanent and unlikely to sail ever again. I think the chains and mooring cables are more a security against floods than a temporary attachment.

The Sphinx
She meditates looking down at a boat-borne garden

One of the houseboats has a sphinx on board, an unexpected sight to say the least, but rather charming as it adds character to the scene.

Time was getting on and the weather was closing in. We felt we had seen all we wanted to see of Burnham for today so we turned away from the river. 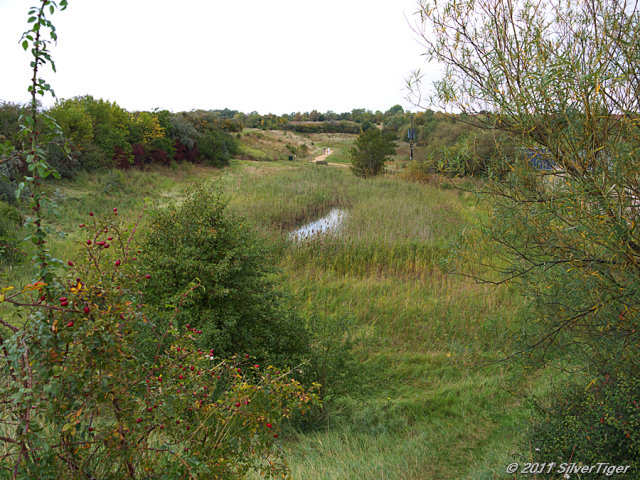 We walked through Burnham Riverside Park and thus back to town where we admired this little garden with a slightly wonky sundial.

The garden is in honour of Burnham’s French twin town L’Aiguillon-sur-Mer.

Starlings congregating
A radio mast is as good as a tree

Starlings were congregating, as they do in the evening, on the radio mast behind the police station. The air was full of their excited chatter.

Burnham-on-Crouch is a pretty town with an extensive riverside, always pleasant for a visit, whether at Carnival or any other time. We shall no doubt return on other outings.

I live in Islington with my partner, "Tigger". I blog about our life and our travels, using my own photos for illustration.
View all posts by SilverTiger →
This entry was posted in Out and About and tagged Burnham-on-Crouch. Bookmark the permalink.

2 Responses to Carnival in Burnham