I got up bright and early as I like an unhurried start to the day. The good news was that there was no snow, at least not here. Even so, I dressed warmly as it was likely to be colder in Sheffield even if there was no snow. I’d rather be too warm than too cold.

Dawn seen from the train

One of the magical features of this planet of ours is the changing light as the earth revolves about the sun and completes its diurnal rotations. As an overcast sky slowly brightens, the countryside emerges from darkness and takes on a misty beauty of muted colours with a glint here and there of water reflecting the grey light of the sky. Ducks and geese stand thoughtfully beside a lake whose surface mirrors the trees. Allotments make a randomized pattern amidst the uniform green of the surrounding fields.

We arrived at Sheffield on time at 9:52. As usual we walked to the Sheffield Interchange (bus station to you and me) and caught the FreeBee free bus. If you detect a similarity with other Sheffield trips, you are right: we have been to the same delivery address several times before.

As before, the package was addressed to the office but not to a person and so we knew to take it to the goods entrance. Deliver package; phone base to confirm; job done.

As before, the FreeBee took us back into town and we entered the Winter Garden and the museum cafe where we ordered our usual vegetarian fish and chips.

Silver balls and back entrance of the Winter Garden

Each time I come to Sheffield I look around and try to recognize the places and the buildings I knew as a student and each time, though I do see things here and there that I remember, in general I feel as if I am in a strange city. Sheffield has been extensively altered and I am learning to know it anew.

The sun comes out!

Generally, my impressions are favourable. I think modern Sheffield is an impressive city which has been developed with care and mature thought. Of course, you can only judge a city fairly if you live there for a while and there will be much that I have not seen and that, if known, might modify my view.

After lunch, the sun came out! We thought about somewhere to go. Matlock? No, we had been there on another visit. Rotherham? Er, um, yes, why not? We reached the Interchange in time to see a bus for Rotherham arrive. We ran and boarded it.

This bus turned out to be less than the best choice. It followed a complex route around the country, frequently turning back on itself. Every time we came to a crossroads where the way to Rotherham was indicated, we took any road but that one. After what seemed an hour but was in fact only 45 minutes, we arrived.

I mustn’t be too hard on Rotherham because we stayed only a short while and it’s always possible that we missed all the good bits. My judgement must therefore be seen as preliminary and superficial.

Floor mosaic in the arcade

Rotherham has vestiges of an older and nobler architecture, but vestiges only, submerged in modern tacky, insipid, lack-lustre building design which is the norm today, when the word "architecture" can be applied only in an ironic sense. Let’s not be too hard on this town which is merely following the trend, sad and soul-fatiguing as that might be. 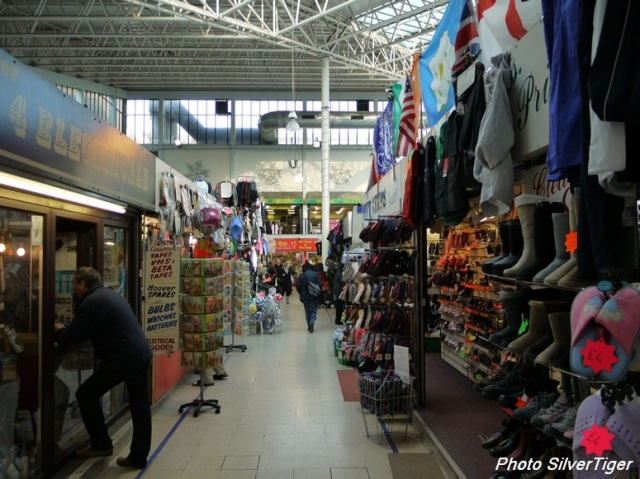 There is also something of a run-down atmosphere to the place. Many buildings are disused and shuttered, some with boards offering them for rent or sale, others looking as if their ultimate fate is demolition. 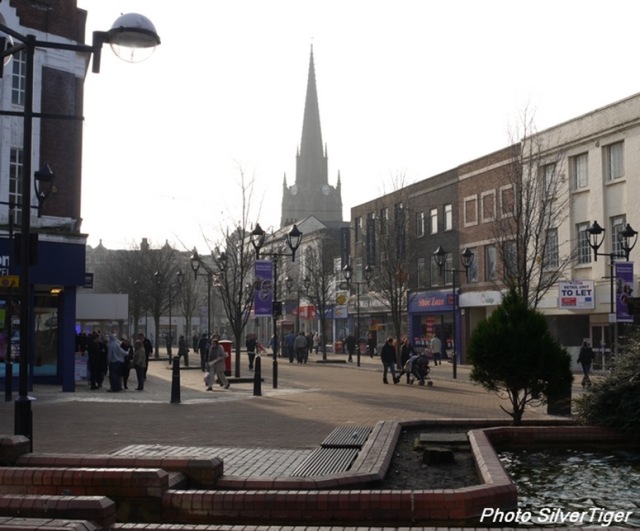 We came, we saw, we went away again. Back in Sheffield we went to a small branch of Starbuck’s near the Winter Garden where the music vied with the sound of the mechanical digger apparently drilling for oil just outside. Say what you will about Starbies, they are consistent and there are never any surprises, good or bad.

After Starbies, we went to the Central Library (opened 1934) and up to the Graves Gallery on the 3rd floor where there was an exhibition of photos by Mapplethorpe. I didn’t take any pictures here, of course, but I did scare myself nicely by taking photos of the stairwell by leaning over the low handrail. 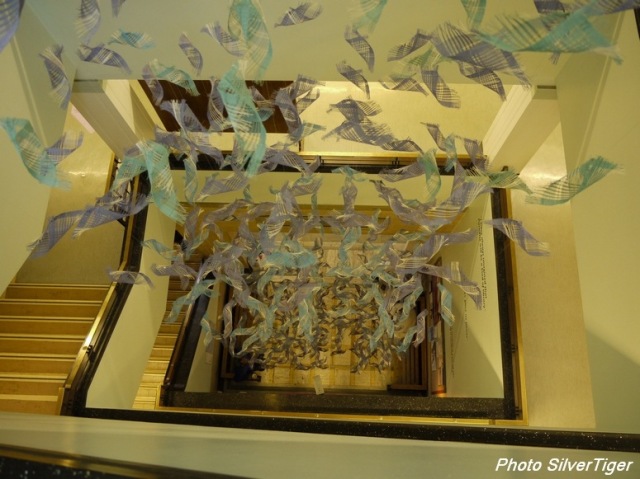 We now made our way back to the station. The return journey was in two parts, first the local shuttle to Doncaster and then the Kings Cross train from there. We thought we were ahead of time but took the first Doncaster train anyway. This turned out to be a fortunate move because this was the last train to make our connection. We reached Doncaster with about 10 minutes to spare.

Light and water near Sheffield station

Our reserved seats would have been far apart so we ignored the reservations and took the first pair of seats with good leg room that we found. Thus we were comfortably set for the journey home. Next time we have a split journey like this one, we must remember to ask the ticket clerk for a print-out of our train times. 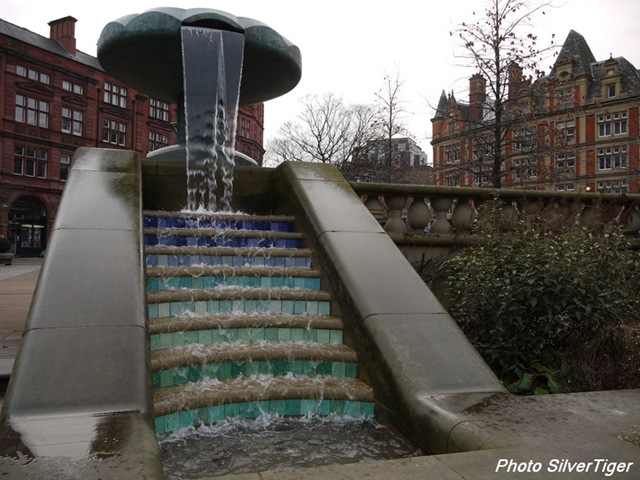 This was an easy run. All went according to plan and the weather behaved: there was no snow nor even a drop of rain. We completed the delivery on time without breaking sweat, enjoyed our Sheffield lunch and made the acquaintance of another town, Rotherham. I only hope I have not been unjust with regard to the latter but I did say my views were preliminary and superficial.

I live in Islington with my partner, "Tigger". I blog about our life and our travels, using my own photos for illustration.
View all posts by SilverTiger →
This entry was posted in Travel and tagged courier run, Rotherham, Sheffield. Bookmark the permalink.

4 Responses to Sheffield and Rotherham